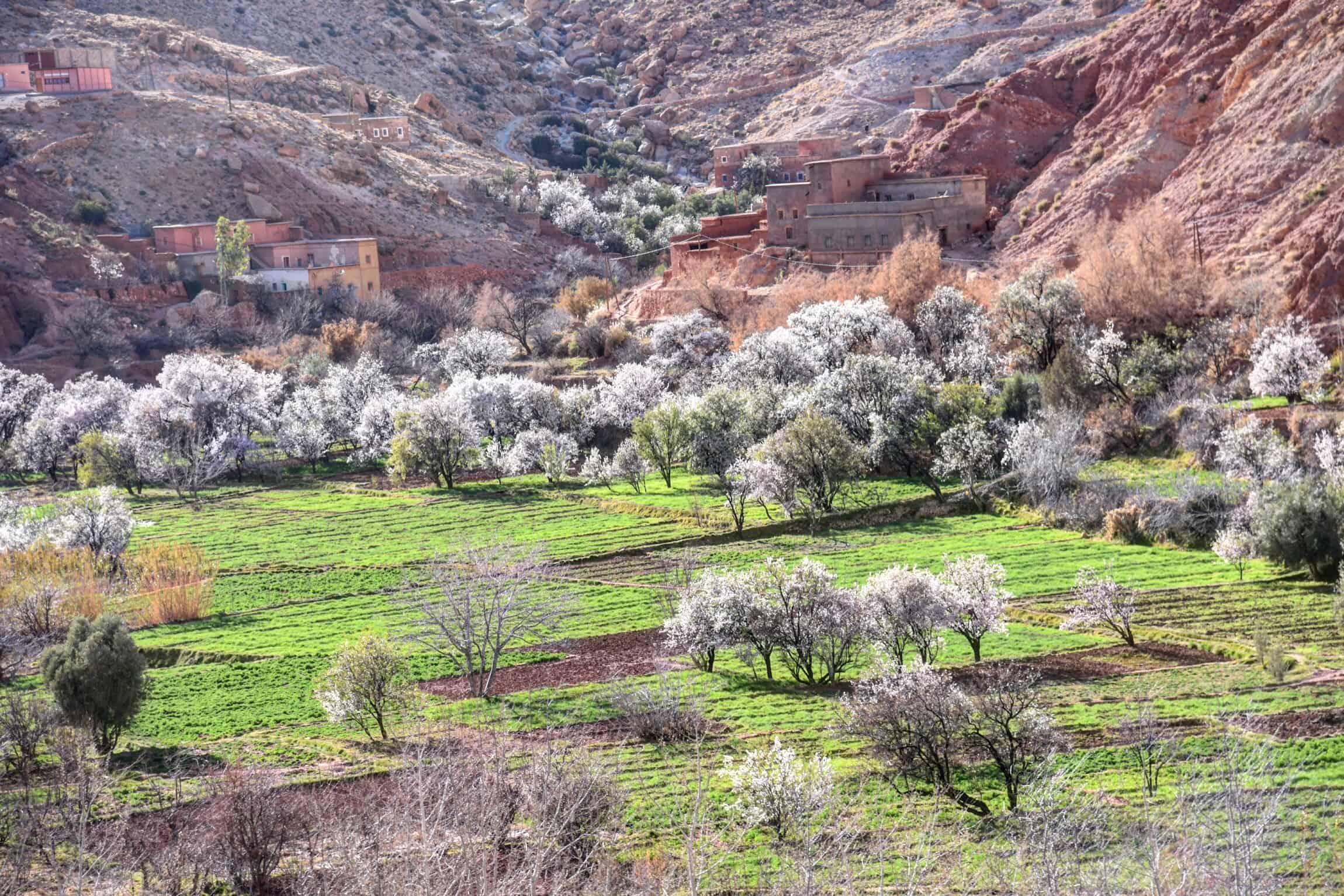 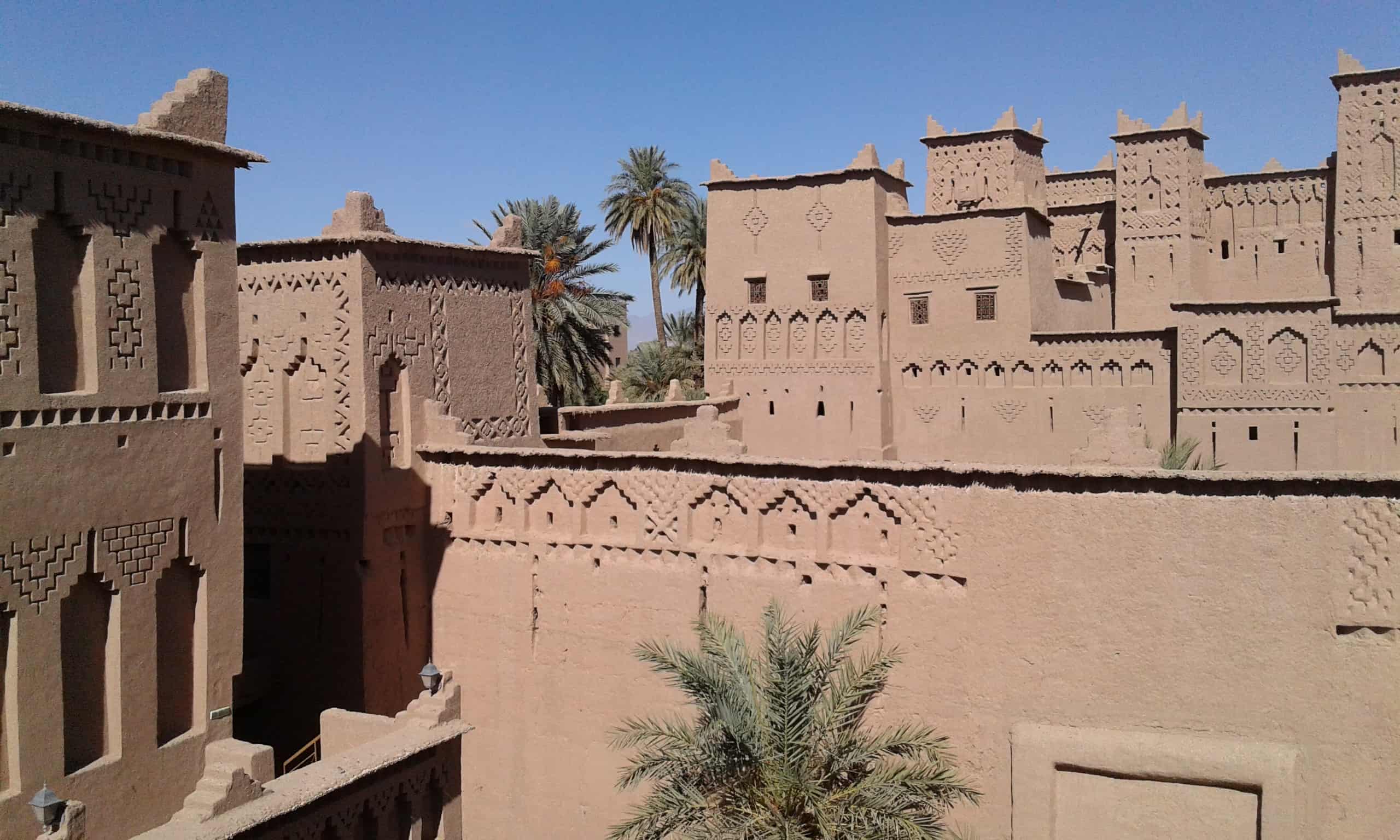 Discover the kasbahs of Telouet, Ait ben Haddou, Amredhil and Tifoultoute and the two oases of Skoura and Fint with time to wander, chat to local people, perhaps to visit the film studios.

This trip takes you right across the chain of the High Atlas Mountains and over the famous Tizi-n-Tichka pass, the highest in the whole of Africa. All along the route, you can see the Berber villages – sometimes hardly distinguishable from the mountains themselves – perched on the side of the mountains. At times you come down into the valleys to drive alongside the river bordered by oleander and fruit trees. The gardens are full of olives, walnuts, pomegranates, apples, pears and quinces. Berber women and children tend goats and sheep and climb even the steepest slopes in search of fodder and firewood.

As you reach the far side of the mountains, you will soon notice the landscape change dramatically, becoming semi-arid and desert-like. Here the Kasbah architecture with turrets on all the buildings, adorned with grilled windows and soft peach coloured walls is instantly noticeable. These traditional houses are made of adobe, highly suitable for the climatic conditions of the south.

After the Tichka pass, you leave the main road and take a side road to the Telouet Kasbah, which belonged to the Lords of the Atlas, the Glaoui family. Each addition to the building now stands in ruins exposed to the wind and the rain, having been abandoned and plundered after the last Pasha fled the country following the departure of the French in 1956. Wait to be pleasantly surprised by the traditional interior decoration as you reach the farthest end of the Kasbah.

From here you drive along the beautiful and awe-inspiring Ounila Valley, full of bends in the roads, surprises at the hues of the rock and soil, Berber villages and gardens, as well as smaller Kasbahs.  Almost at the end of the road, you reach Aït Ben Haddou, where you stop for a tasty lunch.

After breakfast, you return to Ouarzazate to visit the town’s symbol, Kasbah Taourirt, which also used to belong to the Glaoui family, and has recently been restored. It is an amazing labyrinth of rooms leading into one another, with views of the old houses below and over the reservoir.

From here the road takes us some 12 km away from the town and you may begin to wonder where you are headed. And then, suddenly, it descends into a hidden oasis surrounded by high mountains and nestling along a river. Fint Oasis is a very traditional Berber village and once served as the head of the caravan route from the Sahara. It is a secluded spot to wander around, walk along the river, watch the frogs and have a glass of tea. Adding to its interest, scenes from the Games of Thrones were filmed along the river.

The road back to Marrakesh passes the Amethyst Valley, where you might like to get out of the car to look for some of the beautiful stones scattered about. From there you start climbing again slowly to reach the Tichka pass again and so Marrakesh.

The afternoon is spent exploring the UNESCO World Heritage Site of Ait Benhaddou, which has been used as a backdrop for innumerable Hollywood blockbusters. It was one of the most important fortress strongholds on the old Salt Road caravan routes, where traders brought slaves, gold, ivory and salt from sub-Saharan Africa to Marrakech and beyond. If you wish you can have a camel ride here.

From there you continue to Ouarzazate and on past the El Mansour Eddhabi dam as far as Skoura at the beginning of the Valleys of a Thousand Kasbahs. Here you spend the night on the edge of the oasis in a beautiful new but traditionally built Kasbah. In spring and summer, there is the sound of birds and frogs – the only sounds to break the silence while the view of the mountains on one side and the oasis on the other offer complete calm for the soul.

The price for trips includes transport in a private air-conditioned 4×4 a Toyota Prado, and fuel, an experienced English/French/Spanish/Italian-speaking driver/guide, all accommodation and meals; breakfast, lunch, and dinner (please let us know if you have a special diet), entrance fees and local guides. Camel ride in Ait Ben Haddou; if desired.