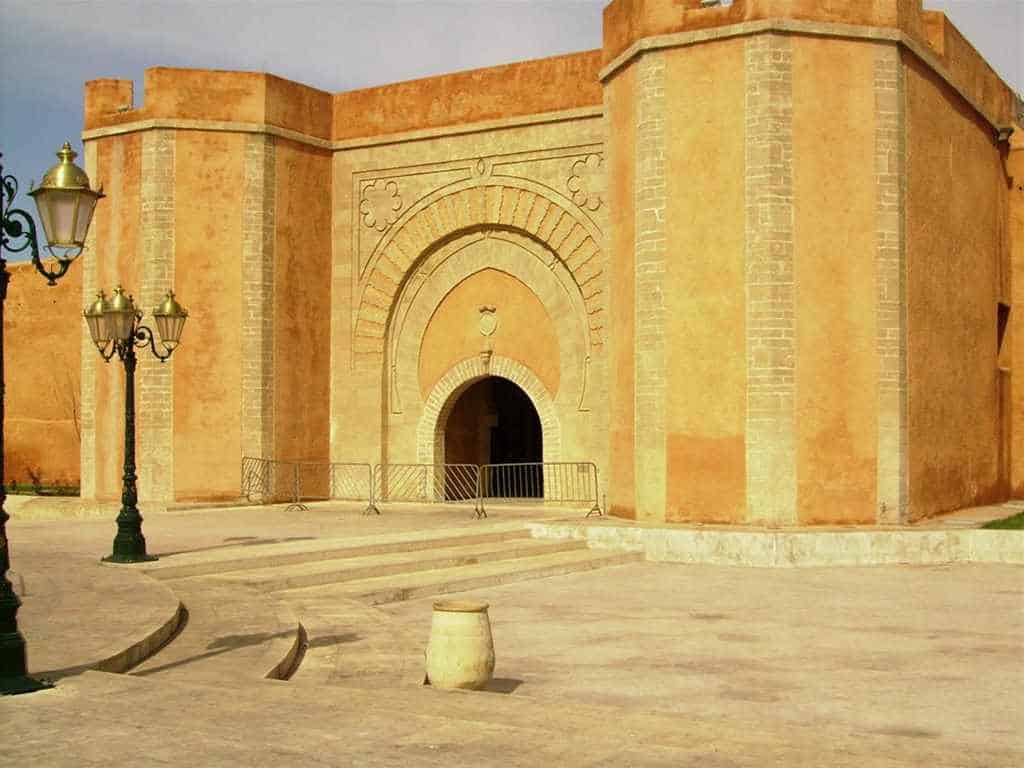 1st day: Casablanca – Rabat
Depending on your flight times we greet you at the airport and travel into the bustling industrial city of Casablanca with the first views of the Moroccan country-side.

Here we can visit the spectacular Hassan II mosque (not possible on Fridays or religious holidays), the largest mosque in Africa and decorated with beautiful tiling of the utmost craftsmanship. You may need to queue for tickets for a while there. The guided tours leave every hour and take about an hour.

Afterwards, we continue to the capital city, Rabat, to spend the night in a riad with time to wander the medina and get the first feel of Moroccan life.

2nd day: Rabat – Fes
After breakfast in the riad, we visit the Hassan Tower and the Mausoleum of Mohammed V, built in homage to the king, who passed away in 1961. His son and successor, Hassan II, who died in 1999, is also entombed here.

Following that, we take the motorway as far as Meknes, where we go north to visit the UNESCO World Heritage site of Volubilis, the expansive Roman ruins, spread over a wide area with beautiful views over the valley and hills.

Then we continue to Fes for dinner and the night in a riad.

3rd day: Fes Sightseeing
Enjoy a full day sightseeing tour in Fes, which is the oldest of Morocco’s four “Imperial Cities”.  The University of Al Kairaouine was founded in Fes by Fatima al Fihri in 859, is considered by some to be the oldest degree-granting university in the world.

The medieval city of Fes El Bali or “Old Fes” remains complete and is unspoiled. During your tour of this part of the town, you can visit the exotic Bou Inania Medersa, the Medina and the Kairaouine Mosque, where you may take photos of the wonderful courtyard from the main gate as well as the famous souks.

In the afternoon, you can visit Fes El Jdid, or “New Fes” and the Museum of Moroccan Arts. The night is subsequently spent in the riad.

4th day: Fes – Merzouga
Departure from Fes at 8 o’clock, travelling past Ifrane, where the houses have sloping roofs, remarkable and unusual in Morocco.  This is to cope with the yearly snowfall.  Near Azrou, 1250 metres, with the geomorphologic Berber name, which means “stone” or “rock”, you can see Barbary apes in the oak and cedar forests of the Middle Atlas. From here, we drive along the N13 south over the Middle Atlas, passing through Timahdite (once again a Berber name, and as the word begins and ends with the letter “t”, it signifies it is feminine.)

We later reach Midelt, 1508M, which is called “the apple capital” of Morocco and lies at the foot of the Ayachi Mountain. The town serves as the commercial agricultural centre for the surrounding area. It is also one of Morocco’s principle cities for the mining of several minerals, such as fluorite, vanadinite, quartz and cerussite.  This is where we will stop for lunch.

We continue south travelling over the Tizi-n-Talghemt pass, known as the “she-camel” pass.  We descend through the Ziz Valley, which is particularly well-known for its palm trees and the length of the oasis. All along the road, there are innumerable “ksars”, small villages of individual houses.

After that, you continue to Rissani and finally the famous red Erg Chebbi dunes in Merzouga. You take a camel ride of an hour to an hour & a half either setting out from the camp or to it. There is also the possibility to take the 4×4 to the camp. Back at the camp, dinner is served, followed by an evening of music and the night in a nomad tent.

5th day: Merzouga
After breakfast, you take the camels, either riding or walking behind, as they carry everything needed to cook your lunch, which will be prepared out in the dunes by your camel man.

You’ll walk about three hours in the morning, followed by another three in the afternoon returning to the camp for dinner and the night.

The alternative is to spend some time in the desert on your own to walk about, or with the camels for, say half a day.  Then you can drive around the back of the dunes to Khamlia and the Berber nomads living in the area to experience Gnawa music with its roots based in sub-Saharan Africa.

6th day: Merzouga – Dades
If you wake up early enough, you can watch the spectacle of the sunrise, when the colour of the dunes and the play of shadows are an awesome sight.  After breakfast at the camp, we leave for Tinghir and the Toudgha gorges.

On the way, you pass the water channels – “khettarat” – which you can descend into to appreciate the architecture and genius behind this form of irrigation which prevents evaporation in the summer heat. The channels start at a higher gradient at one end until they finally emerge at the surface of the soil where they are fed into the fields. You can find out more about these channels by reading Andrew Wilson’s work.

Later in the gorge and the valley, there are opportunities to walk beyond the gorge itself or by the village gardens and fields before you reach it. Then the itinerary continues to the Dades Valley. The area, which now forms the Dades Gorges, lay at the bottom of the sea millions of years ago. Great quantities of sediment were deposited around giant coral reefs, and over time this material became compacted into a variety of sedimentary rocks such as sandstone and limestone. Eventually, the movement of the earth’s crust caused the region to rise above the sea, forming the Atlas Mountains and surrounding landscape. The night is spent in a hotel or kasbah.

7th day: Dades – Ouarzazate
After breakfast, a visit to the Dades gorges and a short walk there is scheduled. Back at the car, the trip to Ouarzazate continues, going off-road along the Boutarar piste to visit Berber nomads in their caves and partake of a glass of tea with them. This visit makes it clear to the visitor just how hard the existence is for these nomads in this very dry landscape, trying to feed their goats and bring up their children.

From here we continue through the Valley of the Roses, famous for its Rose Festival in May. Cosmetics and toiletry items are produced and valued throughout the country.

And then in Skoura and the oasis there, Kasbah Amredhil waits for a very worth-while visit.  The kasbah has been beautifully restored and gives a clear idea of life within such housing.  It is made entirely of adobe, an excellent building material; warm in winter and cool in summer, due to the thickness of the walls.  45 minutes later you reach Ouarzazate, where you spend the night in a guest house.

8th day: Ouarzazate – Marrakesh
After breakfast, the route goes on to Kasbah Ait Ben Haddou, one of Morocco’s seven World Heritage sites, and the backdrop for many Hollywood blockbusters. It is the most famous Kasbah in Morocco and some of the buildings date back to the 17th century.

We continue to Telouet set right in the midst of the mountains and once the seat of the last Pasha of Marrakesh, El Glaoui, from where the highest pass in Africa, Tizi-n-Tichka was controlled. Each addition to the building now stands in ruins exposed to the wind and the rain, having been abandoned and plundered after Thami El Glaoui, fled the country following the departure of the French in 1956. Wait to be pleasantly surprised by the traditional interior decoration as you reach the farthest end of the Kasbah. At the end of the afternoon, having crossed the Tichka pass, we arrive in Marrakesh.

9th day: Marrakesh Sightseeing
Marrakech is probably best known for central Djemma El Fna with its juice stalls, dried fruit and nut stalls, women applying henna, snake charmers, story sellers and the myriad of nightly food stalls. You will visit the following places according to time and inclination: the Majorelle Gardens which belonged to Yves St Laurent and is famous for its special shade of blue, the Koutoubia Mosque, El Bahia Palace which means “the palace of the beautiful”, the Quranic School, the Ben Youssef Medersa which used to house some 80 Quranic students and the Saadian Tombs. You spend another night in your riad.

10 – 11th day: Marrakesh – Essaouira
Essaouira is many tourists’ darling! Previously known as Mogador to the Portuguese inhabitants, it is a charming small town on the coast well- known for local handicrafts, especially thuja wood furniture, carving and small artifacts, sold in innumerable shops along the windy streets.

Orson Wells filmed “Othello” here, making especially the Portuguese ramparts famous in its opening scene. Visit the women’s cooperative where argane nuts are processed by hand into one of the most versatile oils; delicious in salads and a treat for the skin.

At the seafront, the customer chooses a selection of freshly caught fish to have prepared on the spot. The surfing opportunities and the beach make it an ideal spot for coastal lovers. Essaouira has a favourable micro-climate; mild in winter and cool in summer.

This is a truly favourite place to chill after a trip to the desert – on the beach, in the little cafés by the port or wandering in and out of all the little shops. The nights are spent in a riad in the town.

12th day: Essaouira – Casablanca
After breakfast, the journey back to the airport in Casablanca starts (about a five-hour drive). On the way, we can stop in El Jadida to visit the Portuguese cistern and the old Portuguese town surrounding it.

We then continue north along the coast road north past Azemmour or Azamor (from the Berber: Azmmur or Azemmur “the olive”; Portuguese: Azamor) a small ancient town on the left bank of the Oum Er-Rabia River.

We do not charge for children under 5 .The price for trips includes the transport in a private air-conditioned 4×4;Toyota Prado or Mitsubishi Pajero,and fuel. Experienced English-, French-, Spanish- and Italian-speaking driver / guide,all accommodation and meals (except lunch and dinner in Rabat, Volubilis, Fes, Marrakesh and Essaouira) as well as the camel ride on the relevant tours. Drinks and other extras such as entrance fees or tips are not included.