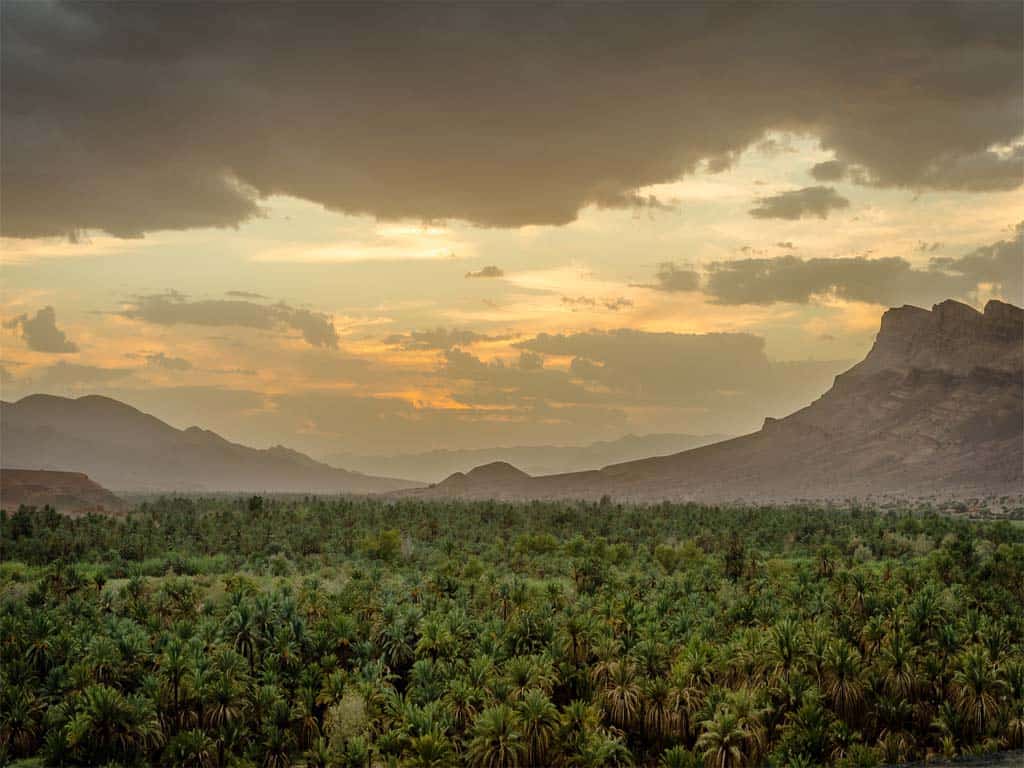 1st day: Marrakesh – Fint
It’s an 8.30 departure from your hotel/riad in Marrakesh to drive across the High Atlas Mountains, where at panoramic viewpoints, there will be opportunities to stop and take photos. You cross the Tizi n’Tichka pass which is the highest pass in North Africa at 2260 metres. It also forms an invisible “border” between the north-west of the country and the south-east, where the landscapes, rock formations and architecture change dramatically.  Now you are in Berber country. The fields and gardens are filled with fruit trees; apple, pear, quince, pomegranate, and there is an abundance of olive, almond and walnut trees. At different times of the year, their produce is offered at the side of the road along with wild mushrooms and thyme.

Down in the plain again you reach Ouarzazate, where you visit the Atlas Film Studios, displaying the sets of scores of Hollywood blockbusters made in the area; the Gladiator, Kingdom of Heaven, Asterix and Cleopatra, Kundun, Game of Thrones…

Spend the first homestay night in a traditional guest house run by a local Berber family in a secluded Berber oasis and where, in fact,  some of the Game of Thrones was shot!

2nd day: Fint – Dades
The road continues through the Skoura Oasis, full of crumbling Kasbahs, the most famous of which, Kasbah Amredhil, waits for a very worth-while visit.  The kasbah has been beautifully restored and gives a clear idea of life within such housing.  It is made entirely of adobe, an excellent building material; warm in winter and cool in summer, due to the thickness of the walls.

Further on, we come to Kela’a M’gouna, the Valley of Roses, with a stop to see the cosmetic products of the valley’s abundant roses. An off-road route leads through the geologically fascinating landscape and local villages. Have tea in the valley with Berber nomads tending their goats and living in caves! This visit makes it clear to the visitor just how hard the existence is for these nomads in this very dry landscape, trying to feed their goats and bring up their children.

In the fertile Dades Valley, you spend the night with a Berber family, or for the more intrepid, after climbing for a couple of hours, with other Berber nomads in their mountain caves. Or else sleep in a traditional guest house by the Dades River, lulling you to sleep as it gurgles along in the complete silence of the mountain night air.

3rd day: Dades – Merzouga
After breakfast, there is time to walk by the river before continuing to Toudgha to the very different gorges there.

After Tinjdad, you pass the water channels – “khettarat” – which you can descend into in order to appreciate the architecture and genius behind this form of irrigation which prevents evaporation in the summer heat. The channels start at a higher gradient at one end until they finally emerge at the surface of the soil where they are fed into the fields. You can find out more about these channels by reading Andrew Wilson’s work.

Visit Erfoud, the most famous area for its uncountable fossil finds and the workshops turning them into artifacts. On arriving at the camp in Erg Chebbi in the afternoon, you can take a  camel ride of an hour to an hour & a half in the dunes to watch the sunset.

You have dinner and spend the night at an authentic nomad camp with shared bathroom facilities and a private tent for each couple or family.

Alternatively, you can choose a luxury camp with private bathroom, king-sized beds, beautiful Moroccan furnishings and lamps tastefully arranged to enhance your enjoyment of the silence and beauty of the dunes.

4th day: Merzouga
After breakfast, you take the camels, either riding or walking behind, as they carry everything needed to cook your lunch, which will be prepared out in the dunes by your camel man.

You’ll walk about three hours in the morning, followed by another three in the afternoon returning to the bivouac for dinner and the night.

Alternatively, after breakfast, you will explore the desert area more fully. First of all, you will be visit the Gnawa people in the village of Khamlia. They specialize in Gnawa music brought from sub-Saharan Africa with the slave trade. They will play some for you.

Afterward, you will visit the old city of Rissani. This small town was the foundation of the Alaouite dynasty – the current ruling royal family in Morocco. It is surrounded by 360 ksars (a ksar is a fortified village with many towers) and has a large souk (an open market) held three times a week. Here you’ll walk through the souk, which sells spices, vegetables, household goods, and handicrafts. Rissani has been built on the site of Sijilmassa, which was the meeting place for the salt caravans, coming from Timbuktu in Mali.

And then in the afternoon, you will mount your camel, and be led by an experienced camel man through the sand dunes of Erg Chebbi at Merzouga for an hour to an hour and a half to watch the sunset and spend the night back in your chosen camp.

5th day: Merzouga – Ait ben Haddou
If you wake up early enough, you can watch the spectacle of the sunrise, when the colour of the dunes and the play of shadows are an awesome sight. Return to the bivouac on the camels before continuing to the Dra’a Valley via the village of Tazzarine (featured in the film ‘Babel’), and on to N’Qob for lunch. In the afternoon you join the Dra’a Valley with its huge date palm trees and ancient villages at Tansikht, before taking the ancient caravan road between the river and the mountains for a short while.

On the way, we pass many villages and gardens so that you can gain a better idea of the way of life in the life-giving oases. You stop to visit Kasbah Tamnougalte, the oldest Kasbah in the Dra’a Valley, where time has almost stood still for some thirteen resident families. We continue over the mountain pass of Tizi-n-Tinfifte (1660m), also featured in one of the most dramatic and crucial scenes of “Babel”.

About 30km from Ouarzazate, we reach the Ksar Ait ben Haddou, to spend the night in a very traditional Kasbah owned by a Berber family and where no electricity has been added.  Enjoy a candle-lit dinner.

6th day: Ait ben Haddou– Marrakesh
After breakfast, you will have plenty of time to visit the rest of this famous Ksar, one of Morocco’s seven World Heritage sites, and backdrop for many of the Hollywood blockbusters, whose sets you have already seen. It is the most famous Ksar in Morocco and some of the buildings date back to the 17th century.

We continue to Telouet set right in the midst of the mountains and once the seat of the last Pasha of Marrakesh, El Glaoui, from where the highest pass in Africa, Tizi-n-Tichka was controlled. Each addition to the building now stands in ruins exposed to the wind and the rain, having been abandoned and plundered after Thami El Glaoui, fled the country following the departure of the French in 1956. Wait to be pleasantly surprised by the traditional interior decoration as you reach the farthest end of the Kasbah. At the end of the afternoon, having crossed the Tichka pass, we arrive in Marrakesh.

The valleys and desert of the South (3 days)