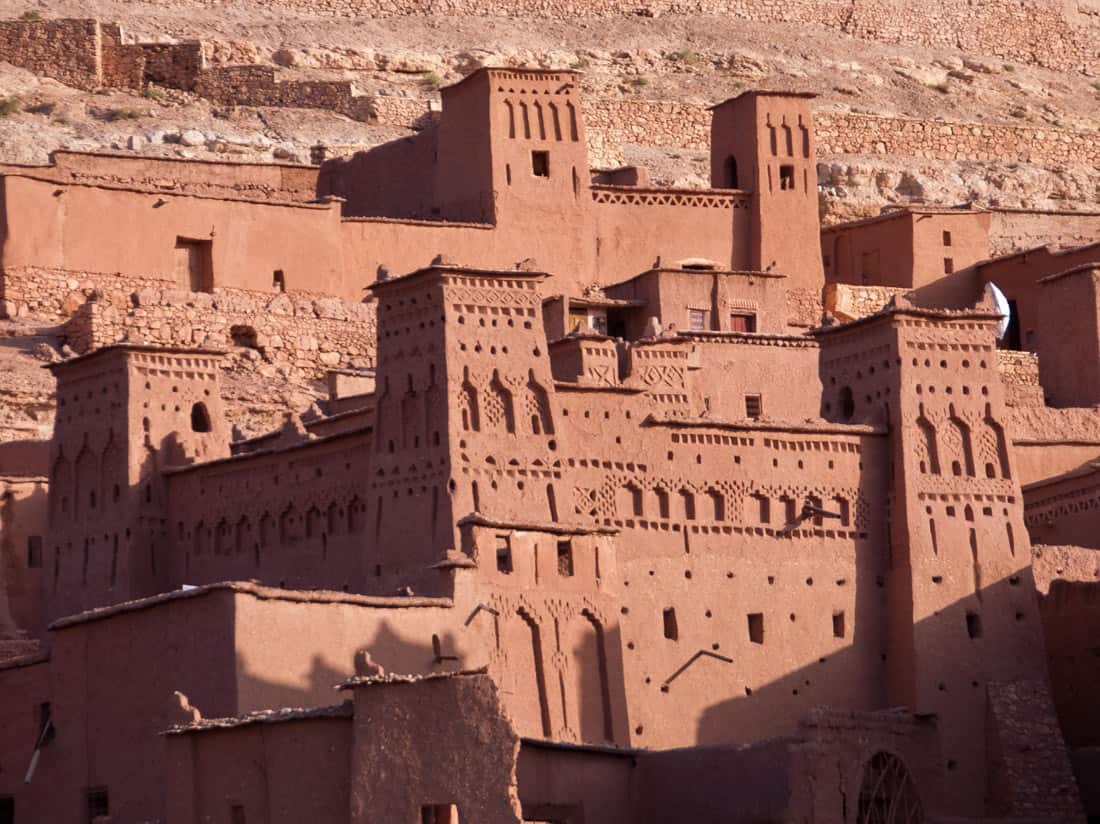 1st day: >Marrakesh – Ouarzazate
Morning departure at 8.30 from your hotel or riad in Marrakesh to cross the High Atlas Mountains.

After the Tichka pass, the highest in North Africa at 2260 m, you leave the main road and take a side road to the Telouet Kasbah, which belonged to the Lords of the Atlas, the Glaoui family. Each addition to the building now stands in ruins exposed to the wind and the rain, having been abandoned and plundered after the last Pasha fled the country following the departure of the French in 1956. Wait to be pleasantly surprised by the traditional interior decoration as you reach the farthest end of the Kasbah.

From here you drive along the beautiful and awe-inspiring Ounila Valley, full of bends in the roads, surprises at the hues of the rock and soil, Berber villages and gardens, as well as smaller Kasbahs.

Almost at the end of the road, you reach Aït Ben Haddou, where you stop for a tasty lunch, after which you will be energised to visit this UNESCO World Heritage site and famous backdrop to innumerable Hollywood blockbusters. We continue the short distance to Ouarzazate for the night in a riad or guest house.

2nd day: Ouarzazate – Mhamid
After breakfast we set out over the Tizi-n-Tinfifte pass to Agdez. Descending from the pass you will be amazed at the view of the extensive oasis and the number of palm trees, all indicating the beginning of the Dra’a Valley with its thousands of date palms, producing an amazing 44 varieties of dates.  The date harvest starts in September and lasts a couple of months, so that is the best time to stop in Agdez for the freshest ones.

Shortly after this small town, you stop to visit Kasbah Tamnougalte, the oldest Kasbah in the Dra’a Valley, before taking the ancient caravan road between the river and the mountains for a short while. On the way, we pass many villages and gardens so that you can gain a better idea of the way of life in the life-giving oases.  Just before the police check-point in Tansikht, the driver can stop and show you the dinosaur footprints right at the side of the road. We come to the village of Tinsouline, from where you can drive just a kilometre or so off-road to the fascinating rock carvings of animals long extinct in Morocco at Foum Chenna, some 4000 years old.

Zagora is the largest town in the whole area and where we shall stop for lunch. Later we pass through Tamgroute, where a stop for the potteries famous for the green glaze, which you may have already seen in Marrakesh, and also for its ancient Quranic library with exquisite hand-written Arabic texts.

In the afternoon we drive further south still, to M’hamid, the very gate to the desert and the end of the paved road. This is where the Sahara starts. Here a one- to two-hour camel ride leads to the highest dune to enjoy an unforgettable sunset and to spend the beauty of the night in a nomad tent close to the dunes of Erg Lihoudi.

3rd day: M’hamid – Chagaga
After breakfast, you return to M’hamid by camel or by 4×4 as you wish, to visit the old village across the now frequently dry Dra’a River. The old village is typical of desert dwellings with adobe buildings and covered streets to keep out the searing heat of the height of summer. A wonderful example of these houses is Abdelhadi’s ancestral home which you can visit.

In the afternoon, there is the departure for the Erg Chagaga dunes (300m) with 60km of off-road. This route passes different features of the desert; “erg” (dunes) and “ hammada” (stony desert), oases. These dunes are far away from civilization, in the desert proper, where nomadic life is hard, subject to the vagaries of the wind, sandstorms, and sparse rainfall.  But the silence and the expanse of the sand are overwhelming. Here you could have a second camel ride if you wish. Dinner and a night’s sleep are in a camp of nomad tents.

4th day: Chagaga – Marrakesh
After breakfast, the road takes us through another 90km of the desert with varying scenery; Lake Iriqui, where you are very likely to experience a vast mirage in the heat haze, mountains, and fossils.

Lunch will be in Foum Zguid, the first village after the desert, where it is also possible to freshen up with a shower.

From here the drive back to Marrakesh is along paved roads via the village of Taznakht, famous for its Berber carpets and rugs. Crossing the High Atlas once again but with amazingly different views travelling in the other direction, we reach Marrakesh at the end of the afternoon.